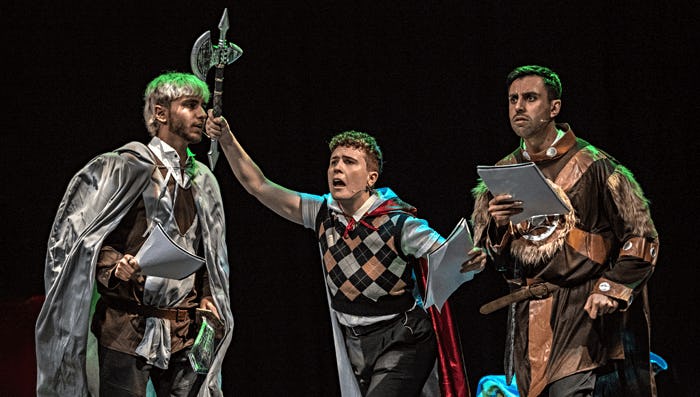 A Great 2022 And Terrific End To The Lysicrates Year 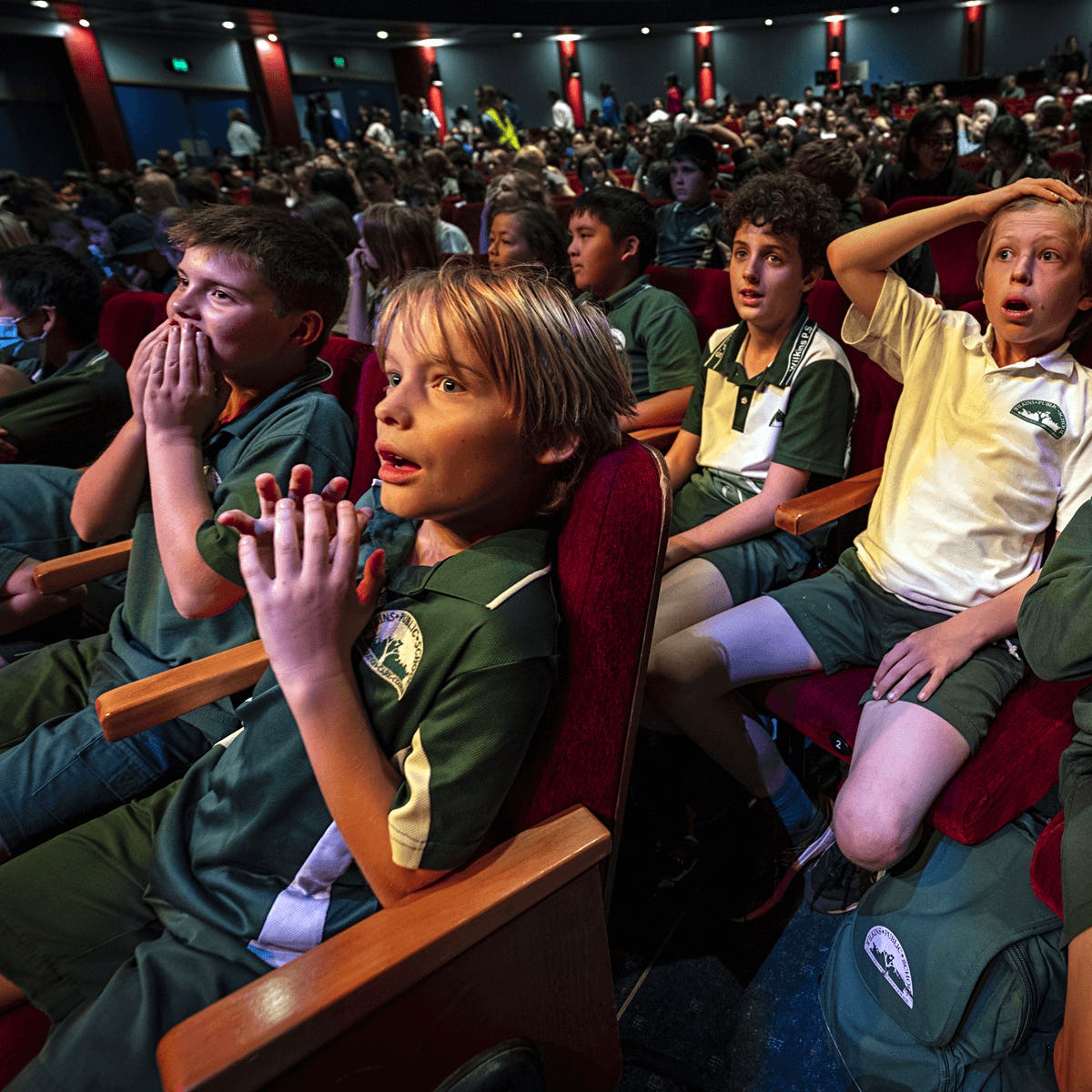 The Lysicrates year of 2022 certainly ended with a bang!

On 8th November 2022, the fifth Martin-Lysicrates Play Event for plays written for children in years 7 and 8 got off to a boisterous start, with a full house of kids hailing opening didgeridoo player Russell Dawson, and gleefully participating in the plays.

Here's the highlights video. Watch the forests of arms waving, hear the uninhibited shouts of laughter, see the kids gasping, covering their mouths, and listening, listening. Very intently. Then, of course, voting. Which they all took totally seriously. And that was good to see. It also got on ABC TV News.

The next month, the Premier, Dominic Perrottet, found time in his very busy schedule to come to Parramatta, and to make two announcements, as well as to unveil the statue of the boy James Martin in Parramatta Square. He had also previously unveiled its twin, now standing in Martin Place. Both Premier and Mayor made buoyant and inspirational speeches at the unveiling. Watch the video here.

Everyone had been waiting for the first announcement - the overall winner of the 2022 Martin-Lysicrates Prize! The 1600 votes from three kinds of audience were added up – from the theatre, from the live stream, and from the website over the previous four weeks.

And the winner was:

DONNA HUGHES from Western Australia, for “Click to Undo”. Three kids are catapulted into a disordered storeroom, and it dawns on them that just like any email, they have been deleted. At first, the audience laughs. But then the kids find out who deleted them. It’s funny, thoughtful, and complex. The kids loved it.

Other brilliant features of Martin Lysicrates 5: Each teacher attending the theatre got two tickets to “Cinderella” AND One teacher, name drawn out of the hat by the Premier, won A RETURN TRIP TO ATHENS FOR TWO, the winner was Sara Green of Scotch College, Western Australia. Clean-up day for Western Australia!

Really gratifying to see how the Lysicrates presence is becoming national! Here’s the video of Russell Dawson on the didgeridoo, and of the remarks of John and Patricia Azarias at Martin-Lysicrates 5.

Here's a breakdown of the Statistics. 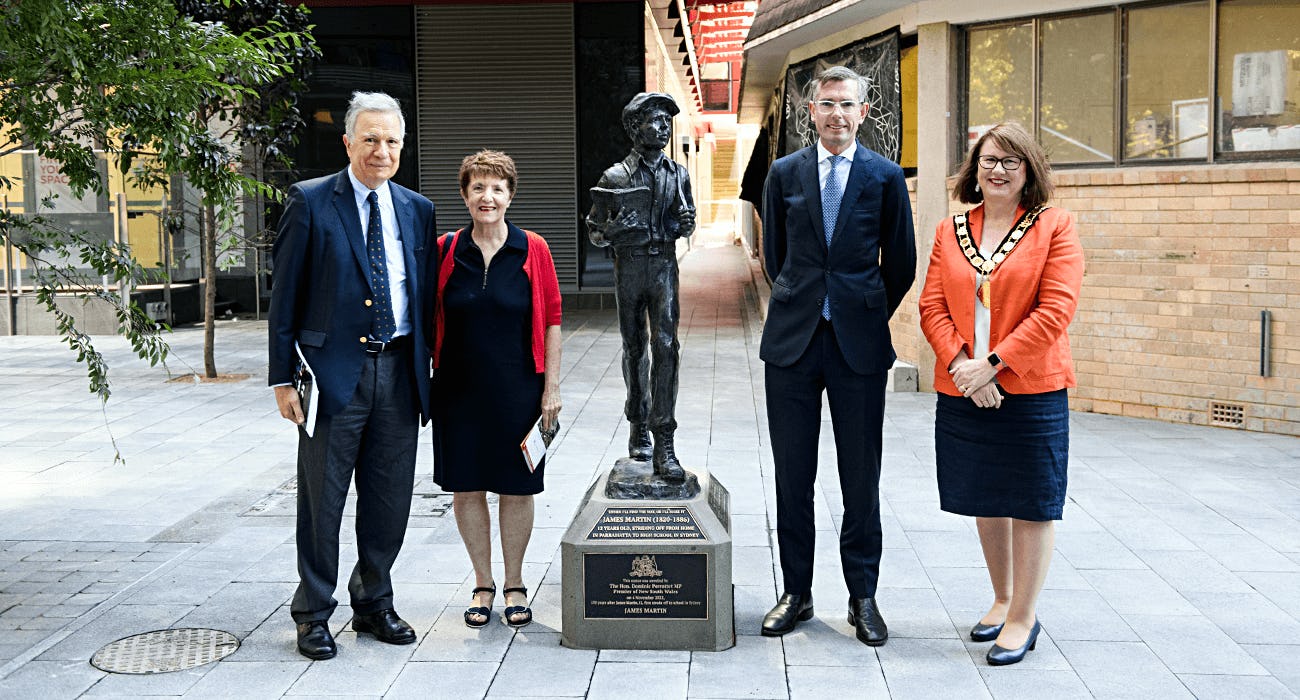 The second announcement from the Premier was also huge, and this one came as a surprise!

In 2023, there will be a children’s walk from Parramatta Square to Martin Place, as an echo of, and to honour, the walk that the brave 12-year-old James Martin regularly did in 1832 and 1833, to get to high school in Sydney from his home in Parramatta.

The modern walk will be done in 1 km relays. Political leaders from all sides will be participating, one for each section of the walk. In Martin Place, there will be a celebration, whose details are being worked out. Any ideas you have for the celebration will be welcome. We already have the enthusiastic support of the NSW Department of Education.

The walk will officially be called THE JAMES MARTIN CHILDREN’S WALK.

The Premier said: ‘This walk will commemorate the extraordinary efforts made by the young James Martin in 1832-4 to walk to school in Sydney from home in Parramatta in order to attend high school,’ said the Premier. ‘This will be an inspiration to all kids from all backgrounds to understand the importance of education, and to believe that they too can achieve great things with enough determination and hard work.’

The Leader of the Opposition, Chris Minns, said: ‘I enthusiastically endorse the Annual Martin Children’s Walk and look forward to participating in the New Year,’ said Mr Minns. ‘I very much support the message it gives that this country offers hope to young people of any background and circumstances that they can achieve their dreams.’

The Lord Mayor of Parramatta, Clr Donna Davis, said: " We are delighted that James Martin, the Premier from Parramatta, the boy who rose from servants' quarters to become Premier and Chief Justice, is being recognised in the ANNUAL MARTIN CHILDREN'S WALK. James' story resonates with the people of Parramatta. We are proud that the hub of Sydney, Martin Place, is named after a Parramatta boy, and we are thrilled that the Walk celebrates the closer bond between Parramatta and Sydney."

So get ready for a unique, fun and valuable addition to the Sydney calendar for 2023!

And now, a word from our 2022 winner, Donna Hughes: The live performance was electric... students... stomping, cheering, laughing uproariously, screaming, leaning forward in anticipation. It was like a rock concert for plays and playwrights and an experience I won’t forget. The Martin-Lysicrates Prize provides an excellent challenge for playwrights... it is a unique event that gives young people a voice and recognises the significance of an Arts engagement in the lives of all young people.

And the last word from the teacher who won the trip for two to Athens, Sara Green, Drama teacher, Scotch College, WA: "As a Drama Teacher I am always looking for new and creative ways to introduce my younger students to watching and enjoying theatre.... It is fantastic to see platforms enabling classes to watch recordings of live theatre from their classrooms. This is one of the things that drew me to the Martin- Lysicrates Prize... The recording and performances themselves were brilliant. The Welcome to Country was outstanding, the boys loved the atmosphere created from the very beginning... This wasn’t just a recording it was ‘live’ theatre, an experience. It was such a positive experience with all 5 Middle School classes and a fantastic end of term activity. I cannot wait to share the winning production with my students and to take part in the experience again in the future."

To be specific, you are beckoned to the Conservatorium at 2.30 pm on 29 April 2023 for the Lysicrates Play Competition for grownups. SAVE THE DATE. You’ll have a great time.