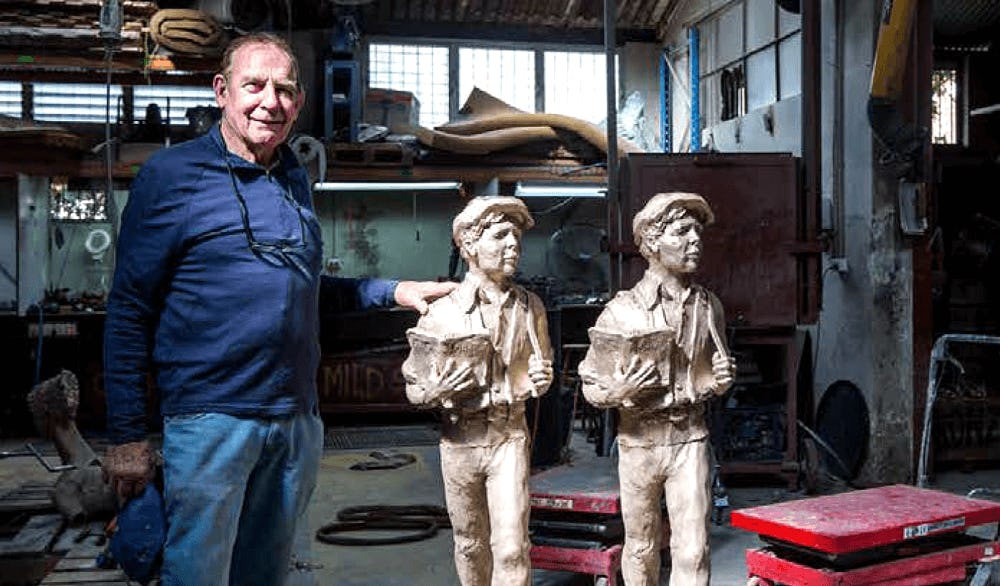 Ideas in Bronze: How the Statues were Sculpted

As a sculptor, it is always gratifying to be offered the opportunity to work on a project of great significance. In this case the task was to depict a young 12-year old boy by the name of James Martin, a determined young man who, despite the odds at that time, went on to achieve great things in his lifetime, as covered in this book.

The brief for this sculpture was to have the young James actively striding along; his poise, while youthful, was to convey his indomitable and purposeful character.

This request was very fortunate for me, as I always like to get movement into my sculptures, even when the pose may be static; however in this case it was anything but static, so the task was much easier and all the more enjoyable.

With any sculpture, my approach when starting out is to draw up many ideas, sketching and playing around with different features like the tilt of the head, the attitude, position of limbs, front, back and side views, generally getting a feel for the overall piece. I then show the client my drawings and after discussion I commence on a small scale model, a maquette. In this case it was one-third life size, about 450 mm high, which when scaled up would be an overall height of 1350 mm. 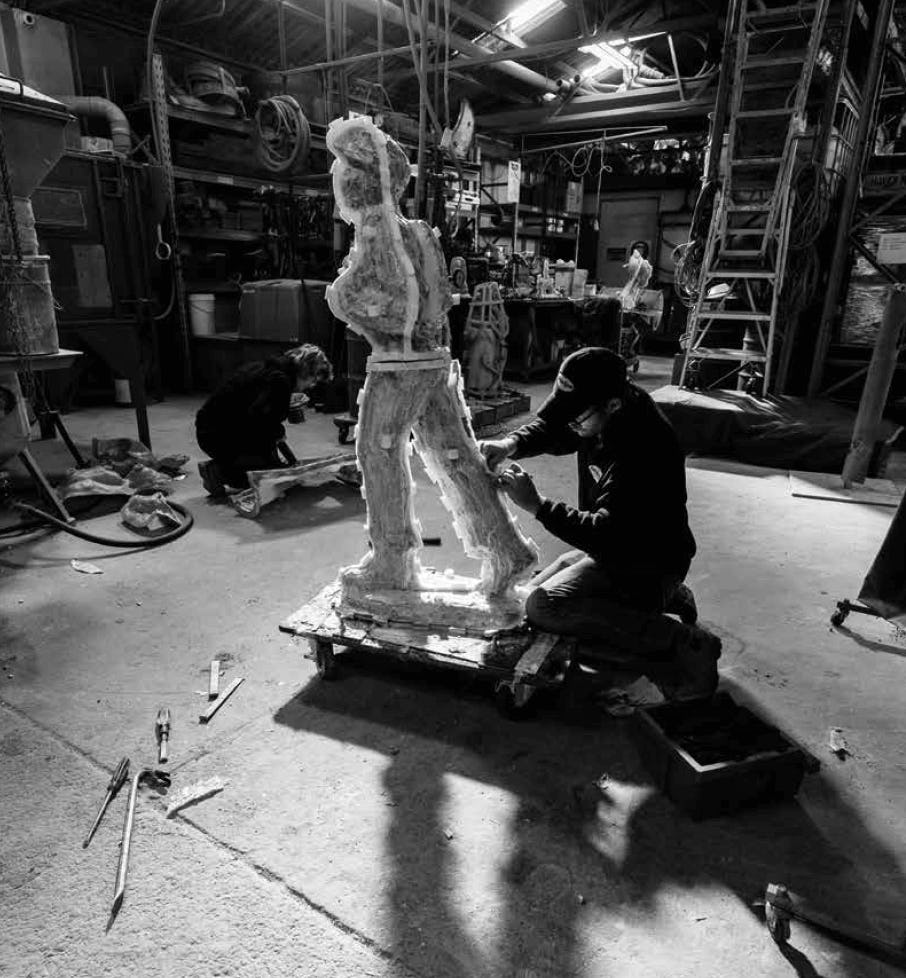 Matt demoulding the rubber from the original artwork. (Opposite; clockwise) Marcel fitting one part of the wax positive sections into a jig prior to investment casting. Alan detailing one of the wax positive sections Marcel heating the investment cast pattern to de-wax the mould. This will leave the cavity between the inner and outer investment castings that bronze will be poured into. The two statues with the artisans from Crawford’s Casting: (L–R) Lauren Baylor, Marcel Jendruch, Daniel Jendruch, Matt Crawford and Keir Bayley.

The modelling medium I like to use is Plasteline (similar to the brand name plasticine). It is an oil and wax based clay. Although it needs to be warmed to be worked easily, it doesn’t dry out like water based clay, and I use it for my larger works, the main advantage being ease of transportation to the foundry for the lost wax casting process.

At this next stage, the maquette is shown to those involved in the commission, in this case a number of people, namely, John and Patricia Azarias, the NSW Public Works Advisory team, Bruce Pettman, Joy Singh and chief stonemason Paul Thurloe, for their input and comment.
This collaborative approach worked very well. Their thinking was mostly positive, but some thought his attitude was a little casual, and suggested there be more of a lean forward with the torso. Rather than alter that model I decided to do another one. This approach suits me, as I can refer to the parts on the earlier version that I want to retain. Finally, the second maquette met with everyone’s approval.

Now the construction of the full size model commenced. I made a base with castors big enough to take the fully modelled sculpture and onto this I built a steel armature. All measurements were scaled up three times from the maquette. 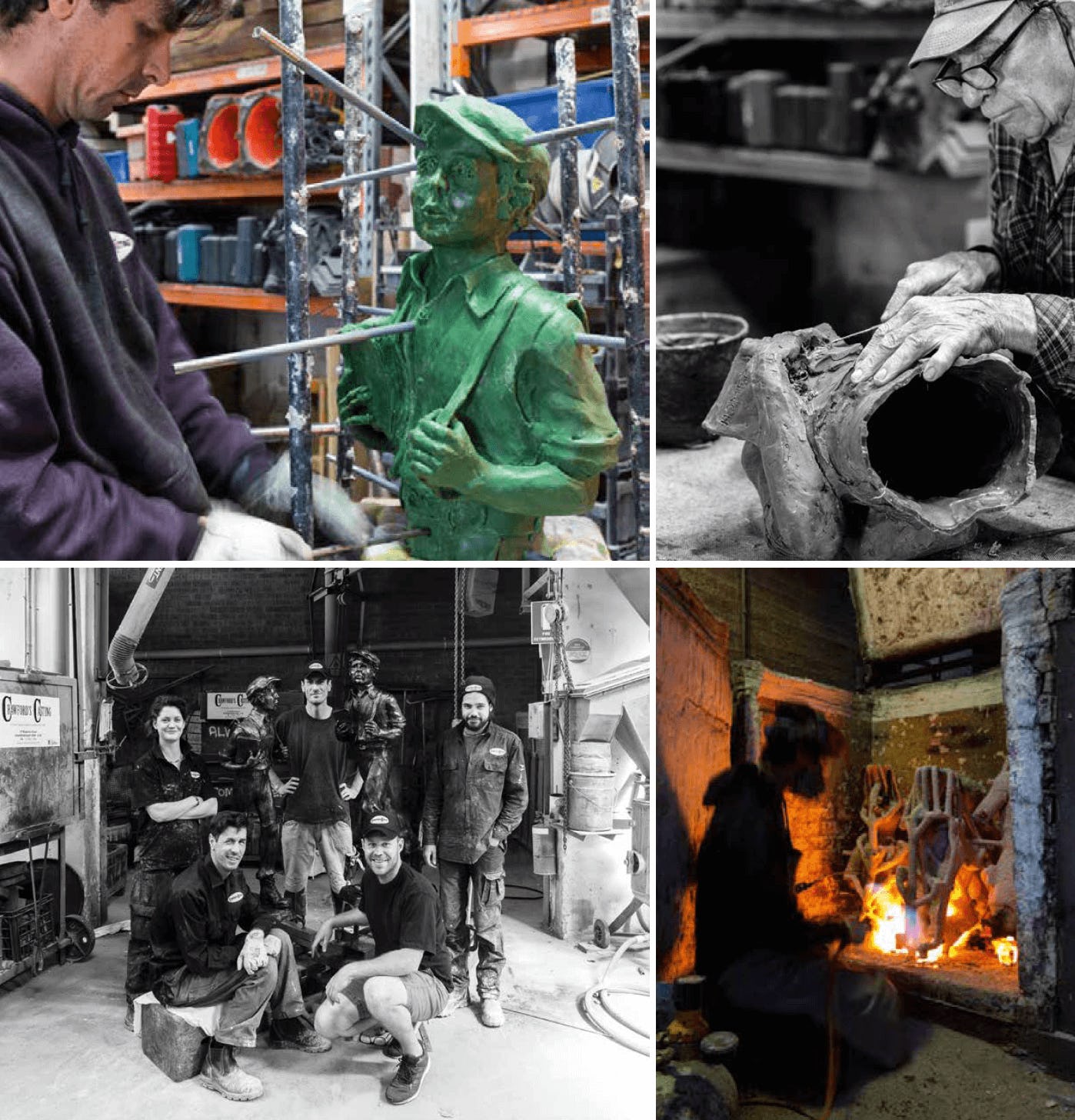 I welded the core steel in place and attached a light gauge flat steel onto which I lace-welded the mesh (like bird netting), close enough to the main core steel to allow thickness of approx. 50 mm (2 inches) of plastiline modelling medium to be pressed onto the mesh. I then applied the modelling medium. I started shaping the forms that will eventually portray the sculpture of the 12-year-old boy. As there were no photos of James Martin at that age, I worked from images in my head. These were referenced by looking at photos of him that are available and using the knowledge of what I have read about him. All this combined to help me visualise James Martin at that age.
Soon was the time of reckoning. John and Patricia Azarias and the steering committee were invited to the studio for – hopefully – the final nod of approval.

Thankfully they were generally happy with the result, with a few minor adjustments to some of the features.

Experience has taught me that everyone sees things differently, so to only have minor alterations was very satisfying.

It seemed that I had created what we all envisaged.

It was just prior to this day that my manager and collaborator on this project Linda Pace made a suggestion. The young James is holding in his hand a book of the works of his favourite author, Homer, and Linda proposed that the name of Homer should be inscribed on the cover of the book by the people who are behind the whole project and without whom James Martin would have just been a forgotten unsung hero. So Patricia Azarias hand-wrote HOMER in English, and John Azarias handwrote in Greek. This was a delightful and symbolic occasion which recapped

the wonderful teamwork that came together to commemorate and honour this great man.

From here we move onto the Foundry where the casting process begins. This is where the lost wax method is used – a process which has remained relatively unchanged for thousands of years.

This entails a master mould of silicone rubber and fibreglass casing being taken of my plastiline sculpture. The rubber is so faithful it will pick up my fingerprints. It is cut in strategic places and removed from the plastiline sculpture, where hot wax impressions are then taken from the master mould. The wax thickness varies from 8 to 10 mm: this is the thickness the bronze will be.

These wax sections then have wax runners (tubes) attached to them. They are then invested in a ceramic material which is layered on by dipping several coats, which are applied after each coat dries. When a suitable thickness is obtained, the wax is then burnt out in a kiln (hence the term lost wax) The molten bronze (1100–1200 Celsius) is then poured into these empty ceramic shells which are broken away when the bronze cools and solidifies. For ease of handling the wax is invested in several sections and when the bronze casting is finished and the feeding system cut off, these sections are bronze welded together by the foundry’s artisans. They still have the plastiline sculpture there as a reference source and I oversee the process. After it has been welded back together and the chasing of all the welds is complete, it is then sandblasted. Finally, a chemical patination is applied and then it is waxed all over and ready to be transported to its destination. 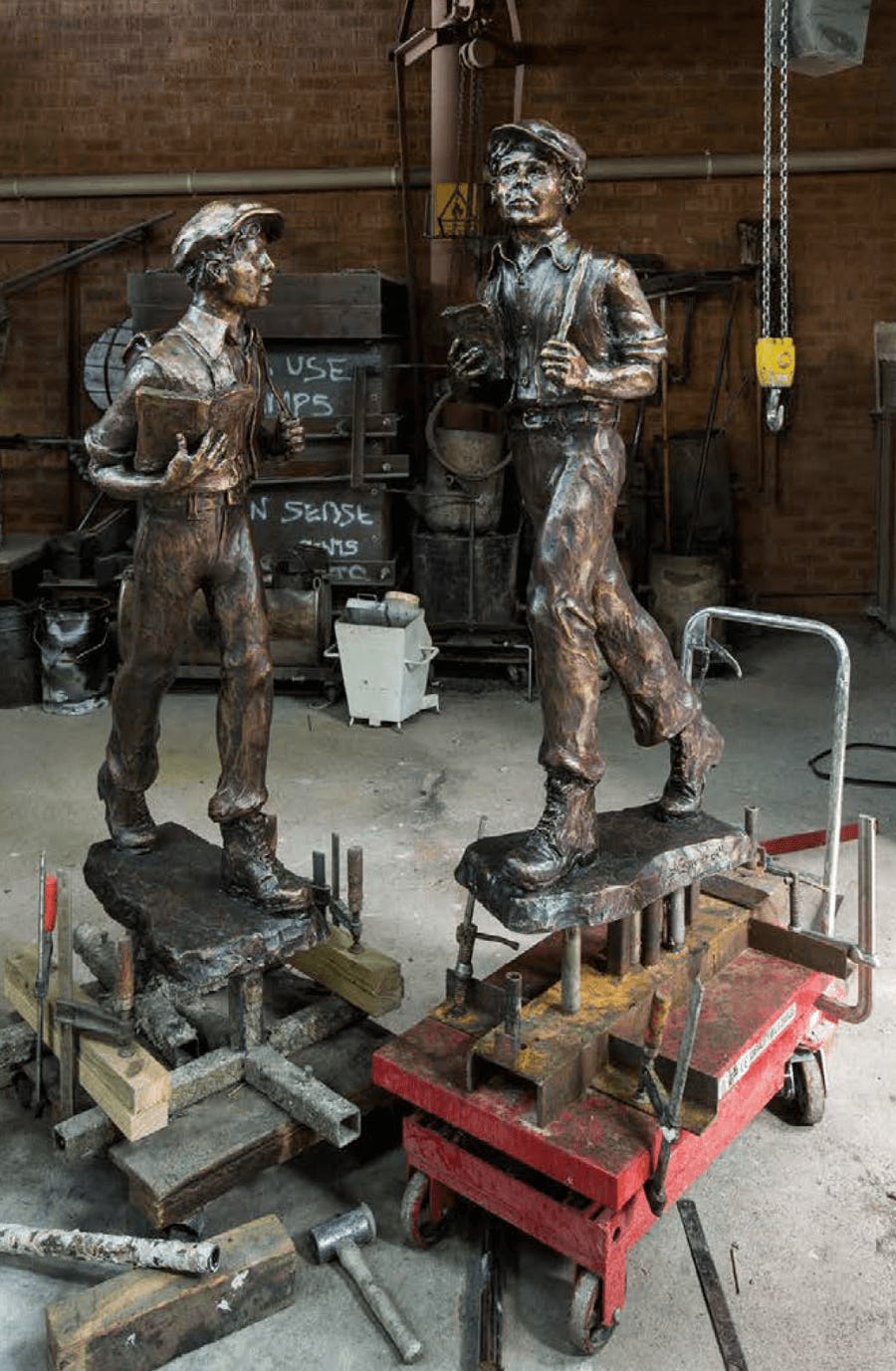 All up it took about six months to make. My sculpting contribution took about three months and a similar amount of time was spent at Crawfords Casting. The entire process was creatively and concisely captured on camera by photographer Douglas Frost.

It was an honour to be selected to make this sculpture. The subject matter and all of the people involved made this an inspiring job. I am thankful for their support throughout the project and for being given the opportunity to partake in the recording of this very special piece of history.